Yesterday, Scott and I got up early, drove for an hour and half and participated in the Peak Hike for Prevention (a fundraiser for the Breast Cancer Fund). I honestly wasn’t sure I was going to be  able to do it.

I was definitely slow, but I made it (12.21km and 3h47min, 20,000 steps, and elevation change of 479m). The hike took place at Mount Tamalplais, north of San Francisco. A tiny corner of the hike (near the top) crossed into the Muir Woods National Monument. We were lucky that it was foggy for most of the time we were climbing up, and the sun snuck out while we were at the top. 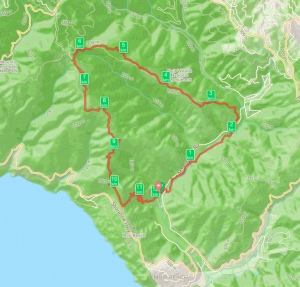 We hiked with a group that I met through one of my friends from support group. The group, Em the Gem, has been doing the peak hike since it started 19 years ago. They walk in memory of Emily (the sister of the team captain, who passed away just before the first hike). When they had t-shirts made the first year, the printer misspelled “honor” as “honer”, and ever since, the team has also been known as “The Honer Family”.

I find that I enjoy events like this because they push me to go beyond what I would have done on my own. Walking with Scott, we might have walked for a couple of hours, but I likely would have turned around after about an hour. Here I was encouraged to keep walking. I was slow, but I wasn’t the slowest. I was encouraged by the tenacity of others who were clearly pushing beyond their comfort zones.

As I plodded along, I did stop now and then and take in the scenery. It was a beautiful day for a hike. We’ll see, maybe next year I’ll do the 11-mile hike.